Noise-Shaping SAR ADCs.
Introduced by the group in 2012, the noise-shaping SAR ADC technique has become an essential ADC design technique.  This technique is widely adopted and enables some of the world’s most efficient ADCs.

RRAM Crossbar Computing
Memristors and memristor crossbar arrays have been widely studied for neuromorphic and other in-memory computing applications. For optimal system performance, however, it is essential to integrate memristor crossbars with peripheral and control circuitry. We build complete compute systems based on RRAM devices and assisted by mixed-signal circuitry. 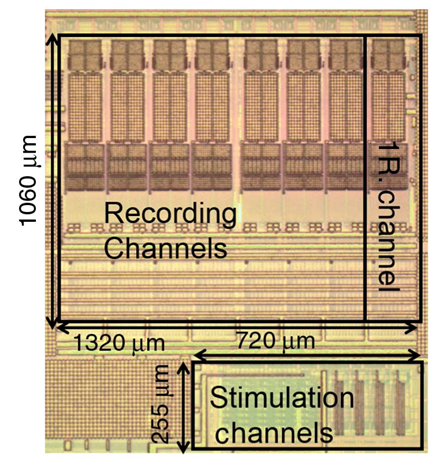 Brain Prostheses
Deep brain stimulation (DBS) of the subthalamic nucleus is an effective therapy for numerous neurological disorders including Parkinson's disease, which affects more than 1.5m people in the US. Our work demonstrated the first closed-loop system for deep-brain stimulation.

Integrated Circuits for Nuclear Treaty Verification and for Detection of Nuclear Material
Verification of arms control treaties may require information barriers to protect sensitive data acquired during the verification process.  These information barriers are commonly implemented in software, but must store and operate on data that are vulnerable to attack and tampering. This research resulted in a new secure ADC that is resilient to eavesdropping.

Real-Time Synthetic Aperture Imaging
Imaging radiometry over millimeter-wave frequencies (30–300 GHz) has the potential to transform security, health care, and remote sensing. Applications include sensing of concealed weapons, detection of skin cancer, and mapping of water in the atmosphere.
​
Proudly powered by Weebly